After many months of planning and anticipation, now that the Philadelphia Flower Show is open and I am missing that persistent looming sensation. I am filling these last few days in Philly with meeting the most incredible people, both in and outside the convention center. I am so appreciative to the friends and family who came to the show, the team during the build process, the supportive horticulture community in Philadelphia and everyone that has been through the show and offered feedback on the garden. 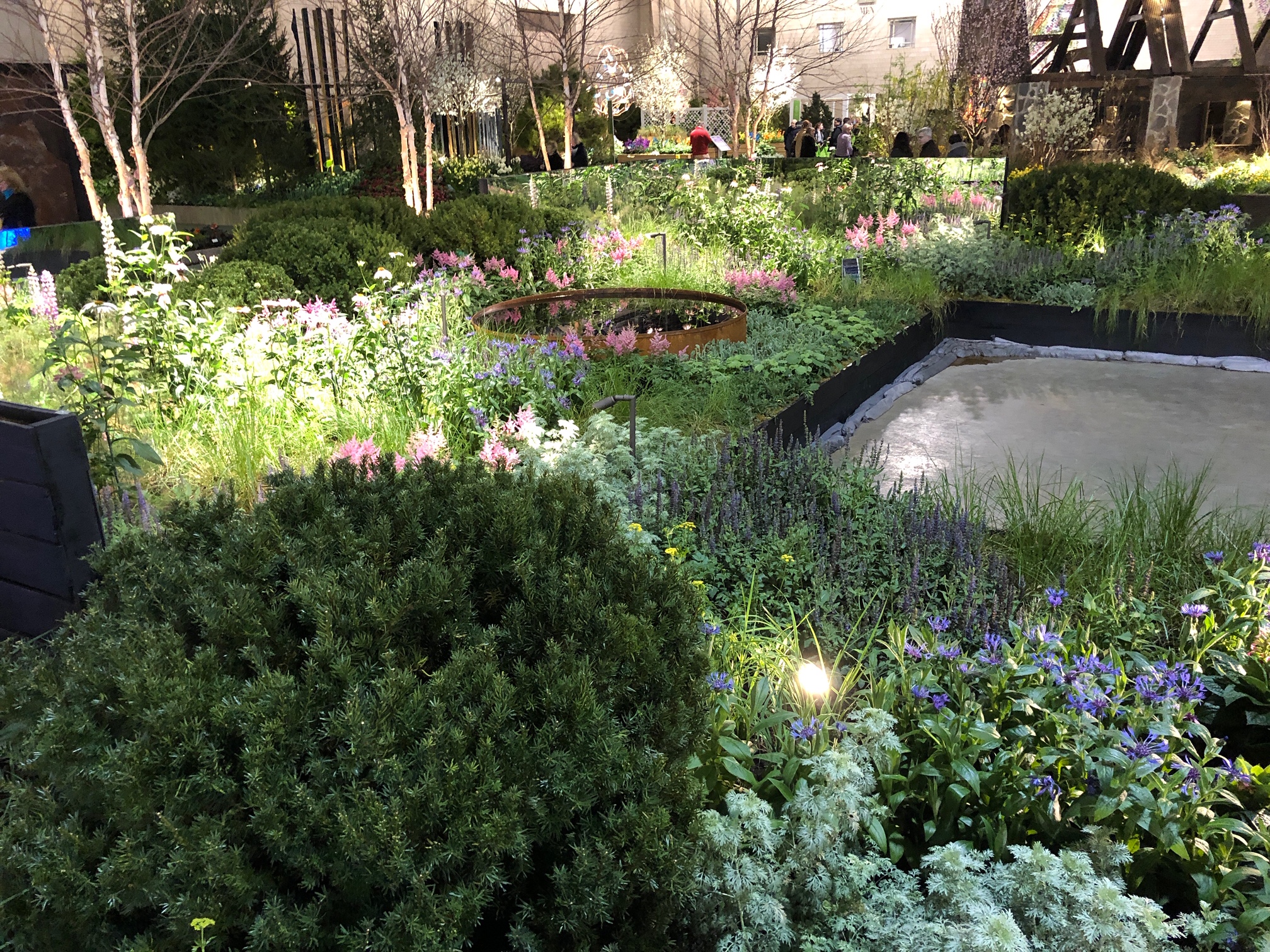 A major part of this garden is sharing my experience from inspiration to building a garden on a concrete floor to live just two weeks. I think the behind the scenes decisions and problems help make the garden more interesting and realistic for the viewer. Plus very few people get to live through this experience and I want to give a peak behind the flower show curtain. I am going to break it up into three posts (inspiration, the design and the build), but if you have any questions between now and the last post please ask anytime. 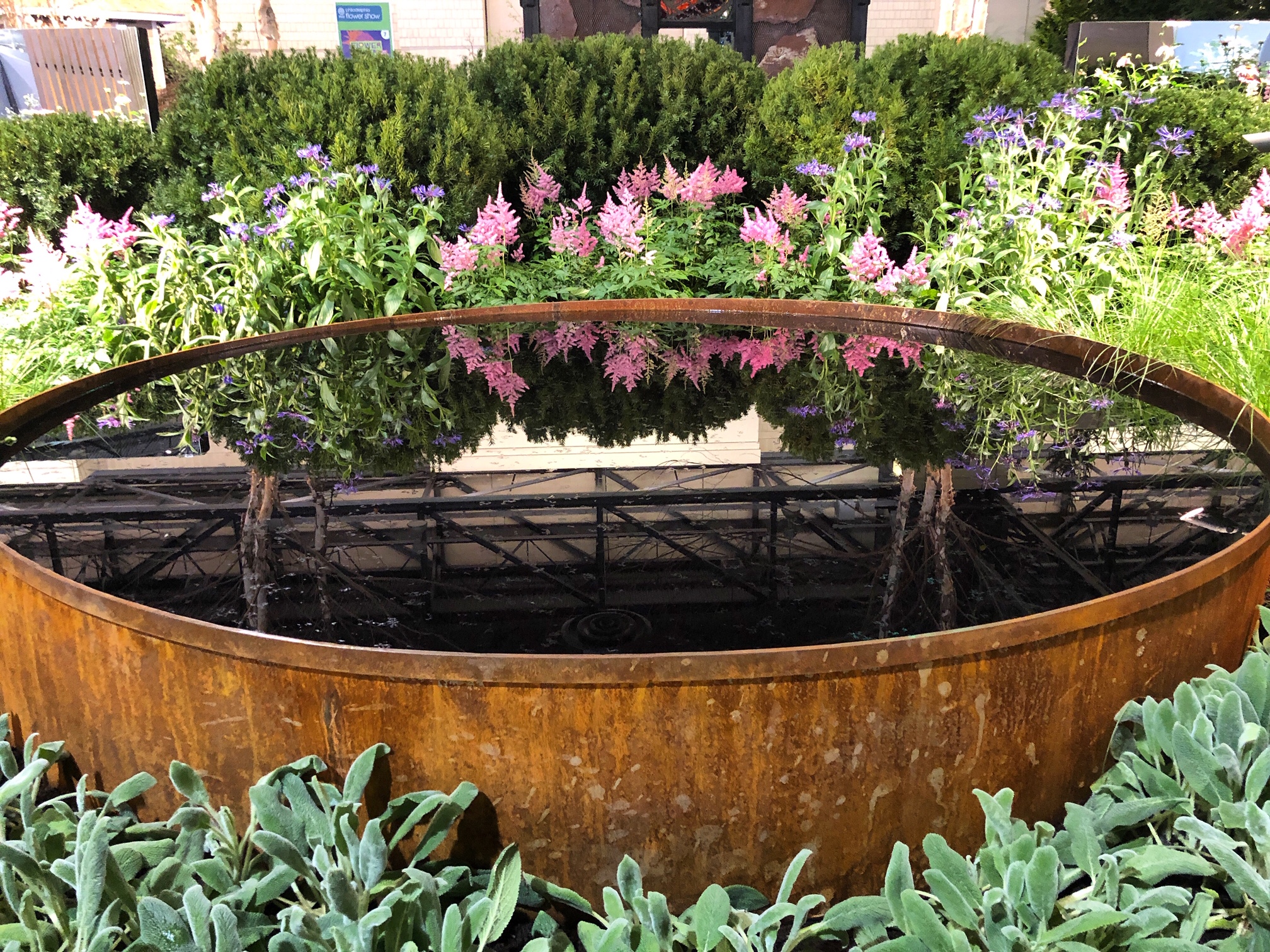 Why is a garden designer from Ohio designing a garden at the Philadelphia Flower Show? First, I want to address the question I have been getting throughout this whole process. My invitation to design a garden at the flower show garden came last July after a chance encounter with a Flower Show team member at Cultivate in Columbus, Ohio. This individual followed me on social media and recognized me while passing on the show floor. After meeting for lunch and talking about American gardening, the garden design profession and my interest in the PHS flower show, a formal offer to design a show garden came a few weeks later. PHS typically has a guest/featured designer exhibit each year, and often the designer is European. I was selected because of my design aesthetic / philosophy, use of social media to promote gardening and desire to alter the American gardening vernacular.

WHY say yes? The Philadelphia Flower show is the oldest flower show in the world, established in 1827 and is hands down the most prestigious in the United States (The first Saturday saw 35,000 visitors). Previous featured designers have included James Basson and Andy Sturgeon, of which have  gone on to design show gardens at Chelsea, Singapore and Moscow Flower Shows. Designing at the PHS Flower Show puts you on the world stage with the backing of a distinguished horticultural organization. I’ve had the desire to showcase my work on the world stage for a long time, and PHS has given me an amazing opportunity to do just that.

FLOWER POWER IN A GARDEN

When designing the garden the only direction provide to me by PHS was the Flower Power theme celebrating the 50th anniversary of Woodstock and the direction to do whatever I wanted to do. Of course there are a lot of limitations building a garden inside a convention center in March, but for the initial concept I stayed away from worrying about the execution and limitations and focused on designing a strong garden no mater where it lived. The key elements I wanted to ensure were threads in the garden included something you walk into and be surrounded by,  a perennial plant driven selection with accurate bloom representation and lighting used in both a practical and artful methods to place focus on the plants.

I started with thinking about the actual power from flowers, both pollinating and medicinal. These concepts are interesting and have a story to share, but I did not feel were impactful or would build a strong garden on their own. Then I started to look into moments where I have personally felt the power of flowers. First was standing in a field of 400,000 sunflowers blooming in Yellow Springs, Ohio and watching car loads of people pulling over walking through the field and posing for photos among the dinner plate sized flowers. Standing in the right spot, it was like having thousand of faces looking back at you (more on this connection later) and you knew you were enjoying a fleeting moment of bloom. 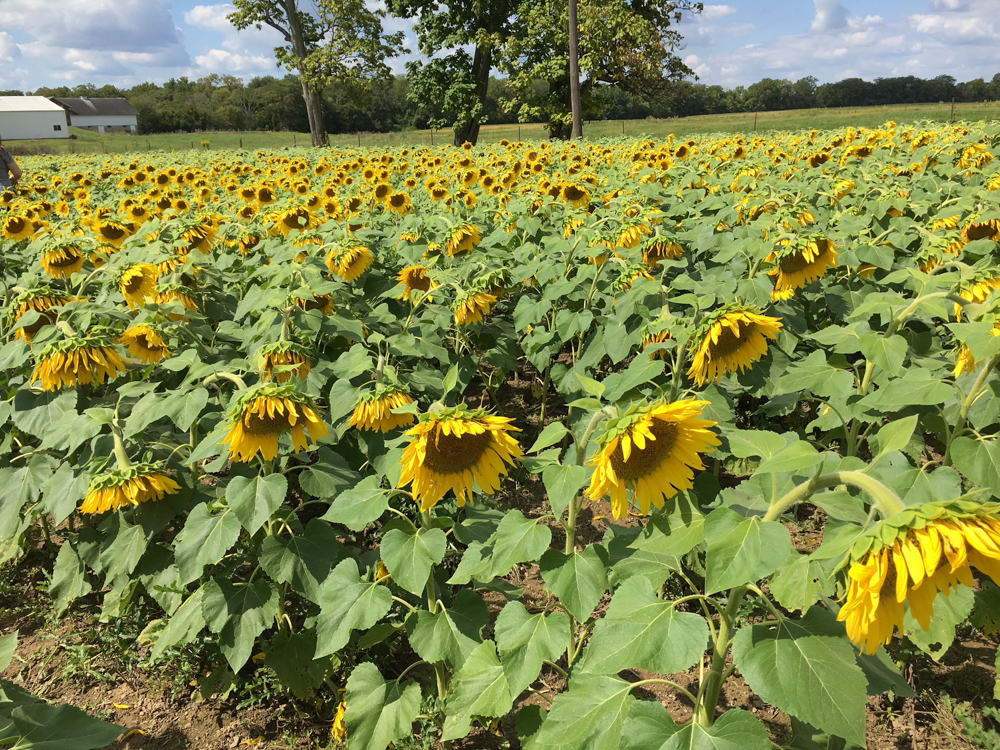 The second is during the 2018 season opener of Red Twig Farm’s peony harvest. The first day to purchase peonies saw thousands of families and individuals drive out to the farm (some from as far as Virginia and Chicago) to purchase fresh cut peony bouquets. People poured over the buckets of flowers selected the best blooms and creating a personal mix of peonies. Often the visitors purchased peony plants to take the growing experience home with them. Again it was a social experience with everyone taking photos of their fresh picked flowers or them exploring the farm. 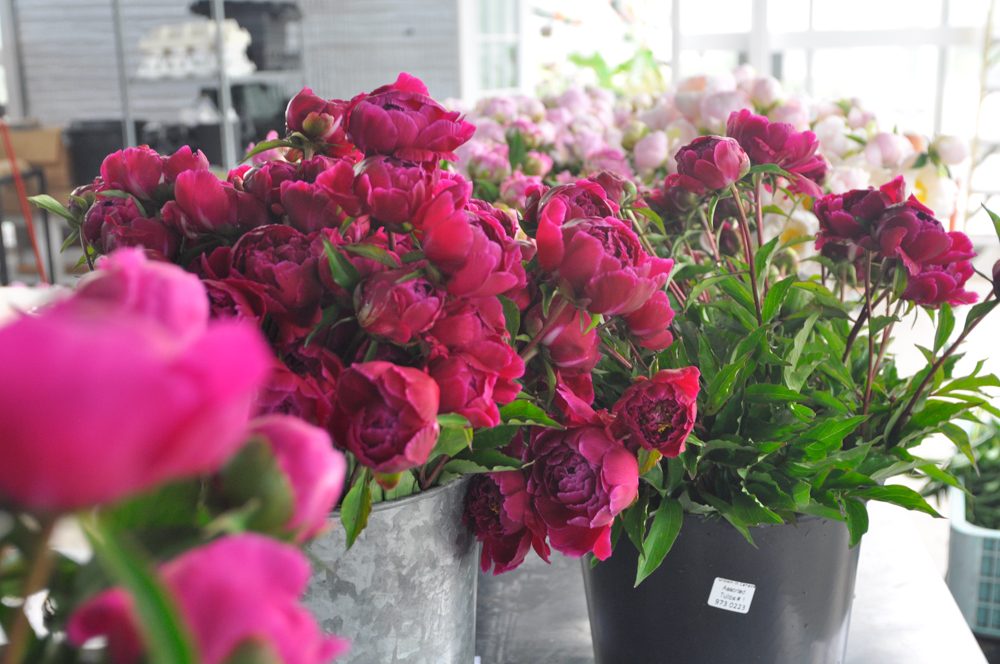 These two experiences provided me with the insight that flowers when in mass are so powerful, they draw people to stop on the side of the road, to push through crowds and drive hundreds of miles to be intoxicated by their beauty. The how to create this experience in a garden came from my visit to Yayoi Kusama’s Infinity Mirrors at the Cleveland Museum of Art. You walk into these rooms and you are instantly overpowered with the mirrors distorting your perception of space and places you the viewer the focal point of the entire experience. It is also a fleeting moment where you are trying to take in as much as possible of the space during your limited 40-second window before being ushered out for the next visitor to enter. This reminded me of the fleeting time my garden will live and how you have to focus on enjoying it now before its gone.  (NOTE: Yayoi created the first infinity mirrored room in 1964, just five years before Woodstock.) 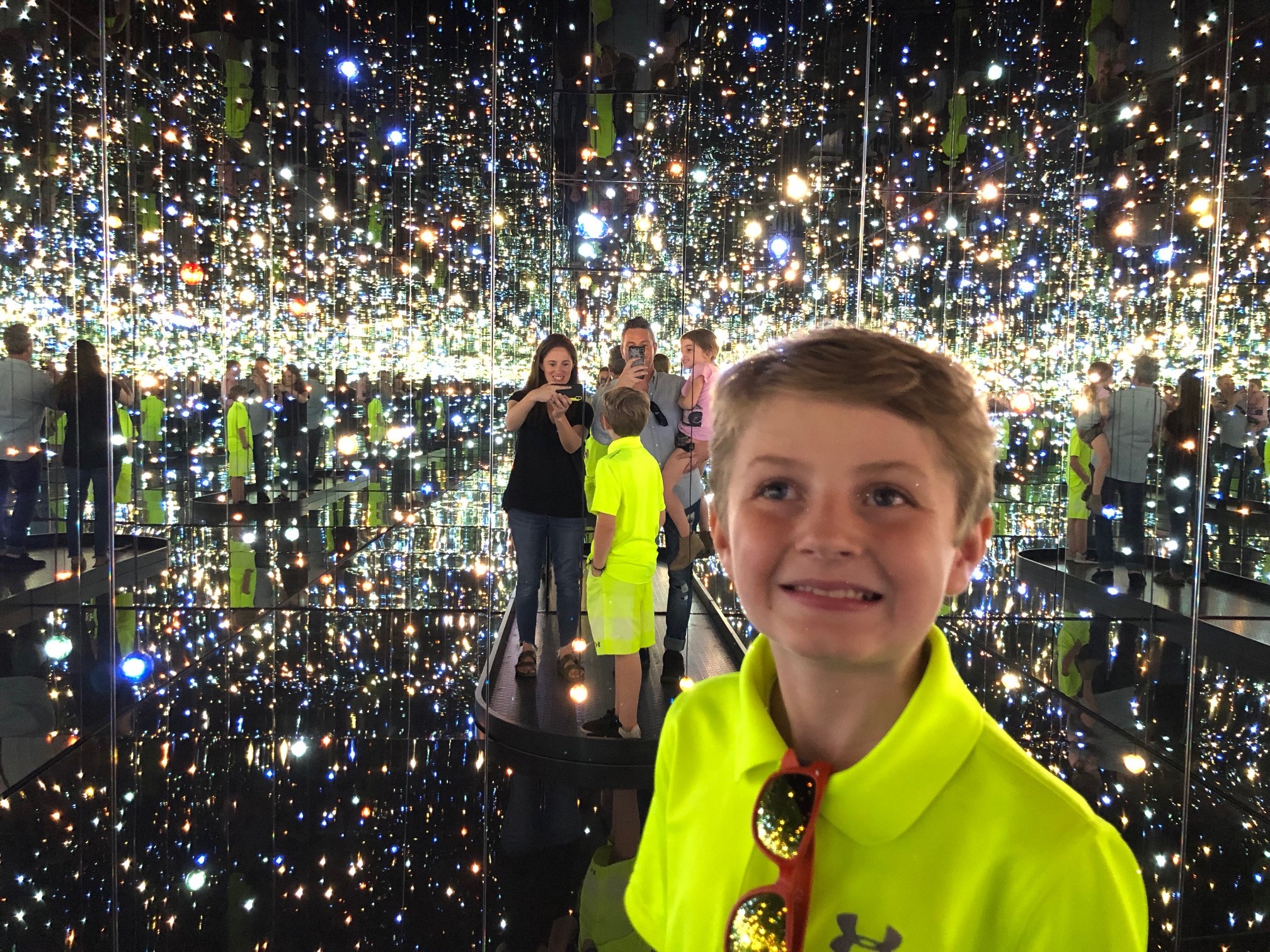 Finally back home and seeing a photo of Sri Swami Satchidananda on stage blessing the crowds at Woodstock, all the elements aligned for designing the garden. I could see the flowers and plants representing the concert goers gazing to the stage fixated on this central figure. Using the mirrors to blur the edges of the garden and compound the number of flowers and textures viewed, I could enlarge the garden and emulate the Woodstock crowd. All of this is directed back to the viewer of the garden, the focal point of the experience. I understand this is a very long and personal explanation for the garden design and maybe why it is difficult for some viewers to see the Flower Power relationship. 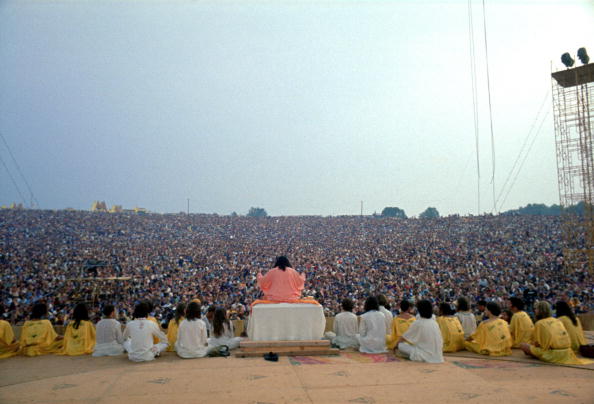 UNITED STATES – AUGUST 01: WOODSTOCK FESTIVAL Photo of VIEW FROM BACK OF STAGE and Swami SATCHIDINANDA and WOODSTOCK, Swami Satchidinanda (Photo by Elliott Landy/Redferns)

Once I had all this click, I was able to design the layout of the garden in about 3 hours. Here is a rendering of my first iteration for the garden. In my next post I will give more details on the evolution of the design, plant selection and details on all the logistics leading up to installing the garden on the convention center floor. Also, we filmed a making the garden video that I hope to share with you in the next few weeks. And if there are any details you want me to make sure I share, please don’t hesitate to ask. 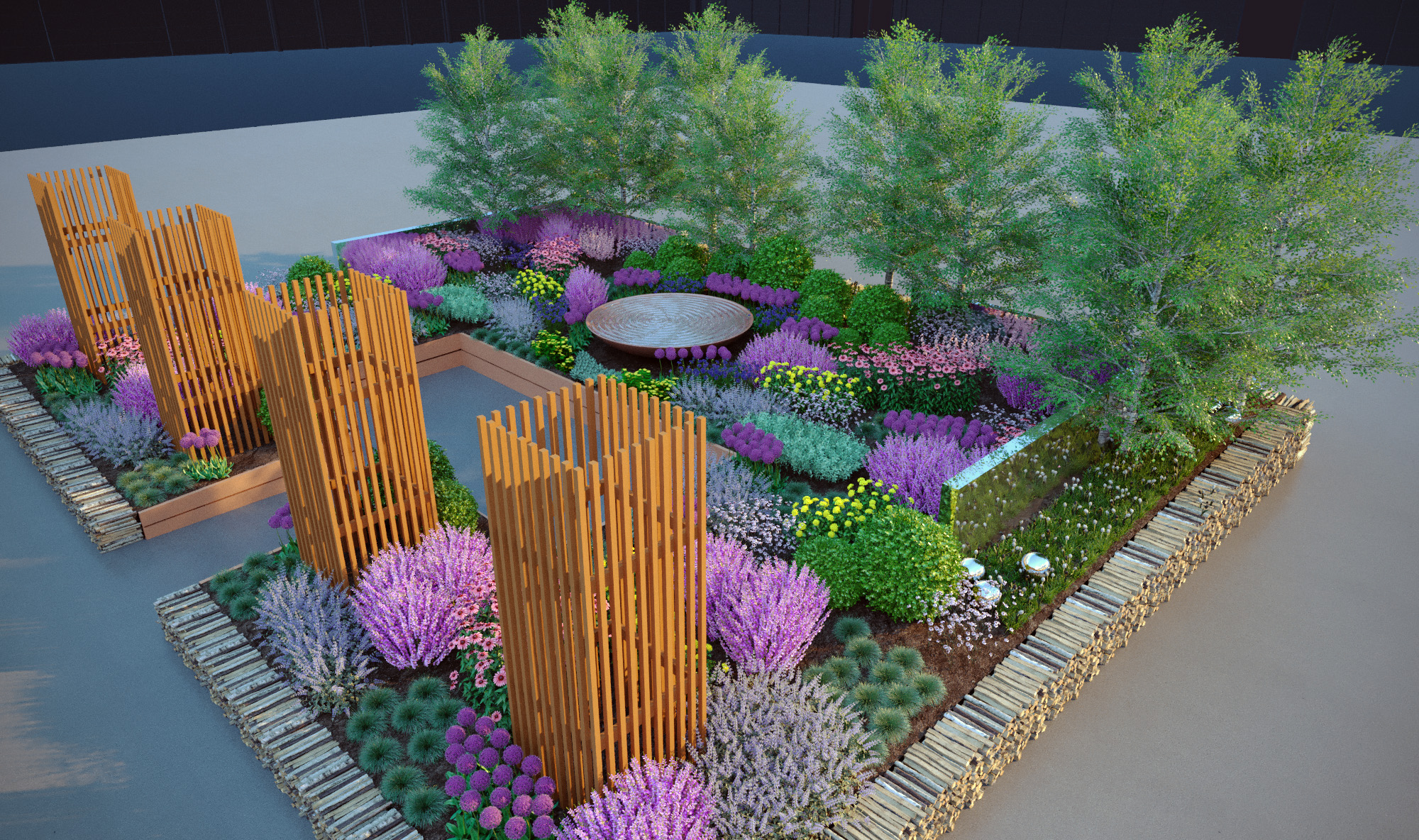